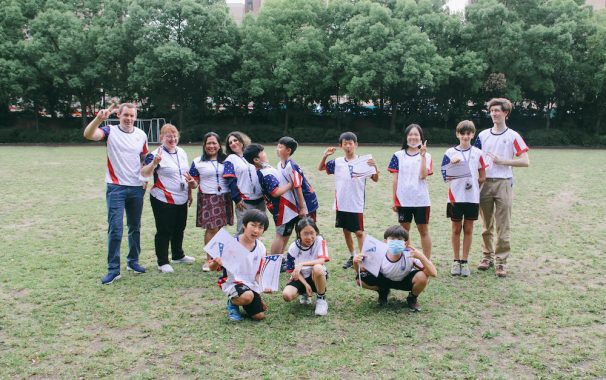 16 of our middle school Wildcats had the opportunity to go to Wellington College to compete in the Shanghai International Schools Mathematics Competition. This 2-day competition (May 31-June 1 for G6) & (June2-3 for G8) where 64 students from 9 different international schools in Shanghai participated in a series of team and individual challenges. 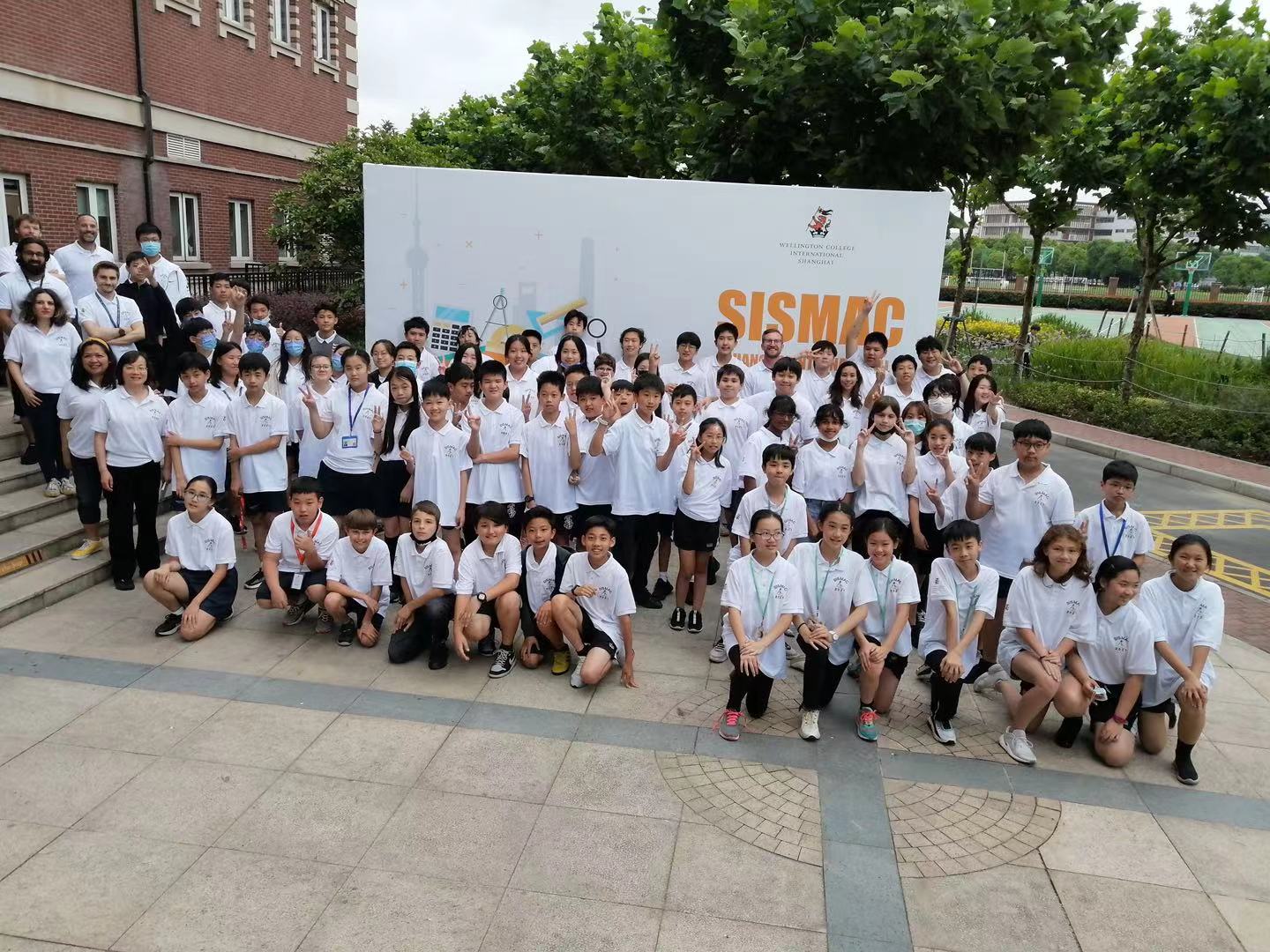 The news about the upcoming Math Olympiad thrilled all the math teachers and students.   As G6 math teachers, Ms. Viviene and I worked with our outstanding G6 participants using 6 weeks of after school.  We had many interested students, but the hard decision was to make and create two teams of four students. With all the communications and preparation, the teams were ready for the challenge. For two days, on May 31 and June 1, 2021, our students were competing with all the famous international schools of Shanghai at Wellington College who hosted the G6 Math competition. 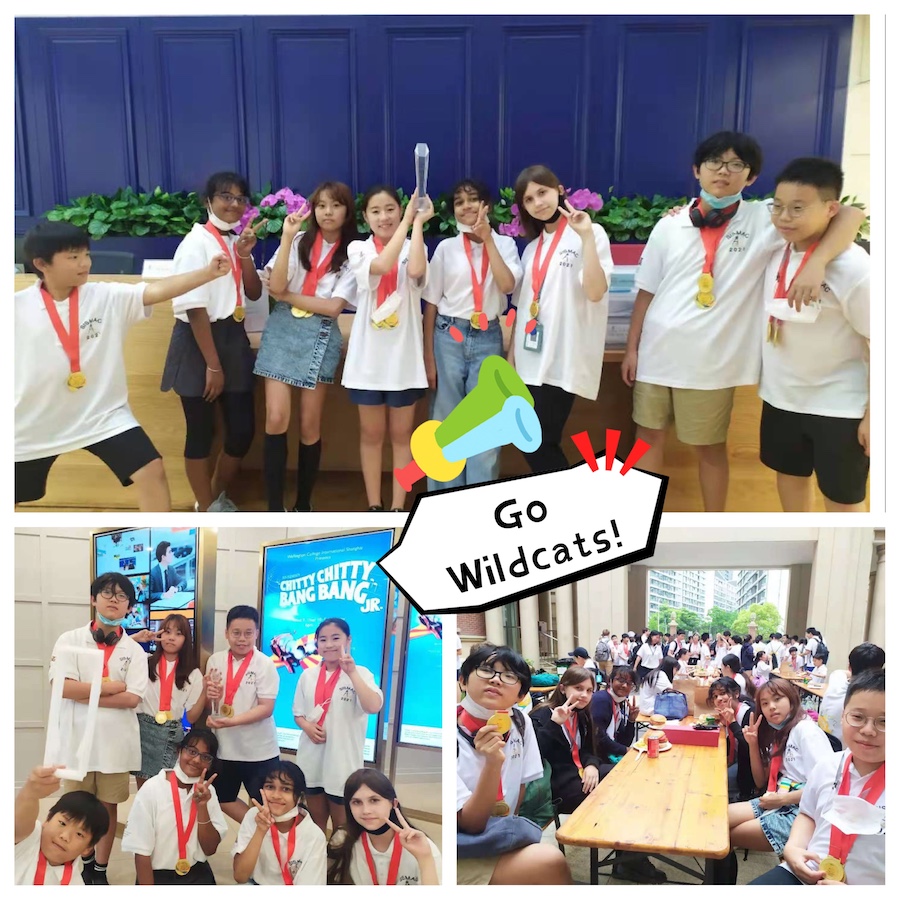 All of our students did great in the competition learning and competing in a challenging but creative event. Ashley, David, Henry, and Iroha shined throughout the competition. They rocked the relay and construction sections, bringing up their overall scores and beating other competing teams. As a result, their team took home 1st place and got the Gold Medal.  We are happy to bring a trophy home!

G8 students at the Math Competition at Wellington June 2-3:

The Shanghai International Primary Math Challenge (SIPMC) was an initiative by British International School that began 3 years ago.  After attending the event in BISS for the first two years, SLAS volunteered to host the event this year. Over the last 6 months the math department have been putting in hundreds of hours inventing and preparing challenges for the students and coordinating with the other international schools in Shanghai which resulted in an excellent two day event in Monday and Tuesday June 7-8.
SLAS welcomed G4 and G5 teams from YK Pao, YCIS, Wellington College, Harrow, British International School and NACIS at around 9 o’clock Monday morning.  The first three challenges were individual events in which the four teammates attempted math and logic problems independently.  Just before lunch they started to work as teams in a sophisticated auction challenge where the students took on roles of buyers and sellers of agricultural commodities in an open-outcry environment. In the afternoon, after brain teasing Pentominoes and ‘Cubes’ challenges the teams went outside to take on the Tower of Hanoi event on the basketball court that the majority of the children described as the most enjoyable challenge.
The teams returned on Tuesday morning and started by working together on some logic and Ken Ken puzzles followed by a rapid-fire arithmetic challenge based on the british gameshow Countdown. After lunch the teams got a bit of exercise with a math relay and the competition was rounded off with a challenge to construct a wind powered vehicle from everyday office supplies – paper, cardboard, sticky tape, bluetac etc.
The participating schools showed great enthusiasm with YK Pao taking home the two main prizes. The event was a great success which is a testament to the hard work of the math department, particularly Ms Lynn, with great support from Ms Faustina, Mr Jamal, the school’s administrative and IT teams. The SIPMC allows ours students to take their mathematical skills to a higher level while interacting and creating friendships with students from other schools.  Participating in these events boosts the enthusiasm of the students to master a broad range math concepts and problem solving skills.  They also finish the challenge with a greater appreciation of the value of teamwork.
Peter Mooney
Head of Math Department